skip to main | skip to sidebar

When discussing our winter party my daughter's teacher suggested a snowball fight.  If you know me, you know that anything that incites children to be rowdy and rambunctious INSIDE a classroom is not my cup of tea.  But, I agreed and I must say that now I'm sort of looking forward to it!  I couldn't afford the snowball fight kits that they are currently selling online and in stores, I couldn't even afford the plush snowballs from Oriental trading.  So, I went to my new favorite site, Pinterest, and found this idea. She used a paint can (still out of my price range) and pom poms she made out of yarn (which is super cute, but again a little expensive when you are making 25 snowball kits).  So I took this idea and I made it cheap to mass produce for my daughter's class;).  I found "paint can" like pails in the Dollar Section at Target and I purchased 2 inch craft pom poms www.createforless.com website (because I shopped everywhere and these were by far cheaper than anywhere I could find).  Each pail is filled with 6 craft pom poms and then I used a silver paint marker to write Snowball Fight Kit on the pails.  This project was less than $2 per kit.  Now, you could certainly make this project even cheaper by using cotton balls or I've heard people even using paper crumpled into a ball.  Either way I was happy with the cost this ended up being.  These would be great little gifts for neighborhood kids as well! 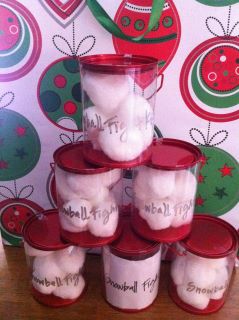 THE RULES:
You can either split your class into two groups or split them into more groups and have "brackets" (I think we are going to create four groups and have them come up with team names).  You then clear the desks and tables out of the way, draw a line down the center of the room with masking tape and have two groups/team stand facing each other.  They have 1 minute to throw the snowballs at each other (the idea that once the snowballs they have in their bucket are thrown then they throw any snowballs on the floor back to the other side of the room).  Once the minute is up you call time and count the snowballs on each side of the room.  The side with the least amount of snowballs wins the game.  If you decided to do brackets, then you would have the next two teams step up and do the same thing and the winner of the first game and the winner of the second game face off.  In our classroom the final winner gets bragging rights.  The best part is that the children get to take this game home as a party favor (and it encourages them to pick up the snowballs:).
Posted by Kimberly at 1:59 PM